Dermot Lowndes in the Irish Times

Thousands will not be able to vote on Saturday, expert warns 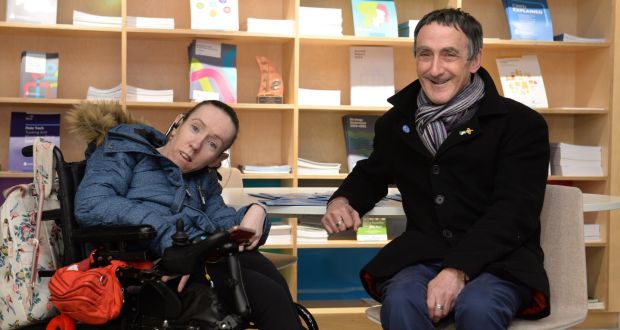 Shelly Gaynor, from Swords and Dermot Lowndes, from Fairview, in the IHREC offices, speaking about the barriers facing people with disabilities when going to vote. Photograph: Dara Mac Dónaill / The Irish Times

Thousands of people will not vote on Saturday because they cannot – whether due to disability, illiteracy, infirmity or because they have never been shown how to, a voter inclusion expert warns.

Bernie Bradley, social inclusion officer with Monaghan County Council and member of the disability advisory council with the Irish Human Rights and Equality Commission, says there is a “huge hidden cohort of people” not voting because they can’t access their right.

“Not voting is seen by many commentators as apathy but there is a complete lack of awareness about the barriers thousands of people face.”

“Low literacy is a hugely private issue,” she says, though it can be widespread, especially among older people. She believes many thousands of people with intellectual disabilities do not vote because they have not been supported to register to vote.

It is the State’s responsibility to uphold people’s right to vote, she adds.
Polling station staff, or a “polling companion”(friend or family member over 16) can help a person to vote, including helping them fill in the ballot paper.
“All polling station staff should offer everyone help regardless of whether they look as if they need it,” says Ms Bradley, as some people may not know to ask for help.

She cites one elderly man who voted all his life but developed a hand tremor. He continued going to the polling station every election hoping he could steady his hand to fill in the ballot, but couldn’t. Rather than ask for help he put a blank ballot paper in the box for several years until he was, during a recent election, offered help filling it in.

“A big publicity push is needed to tell people they will be helped at the polling station if they need it. If the process is accessible more people will engage.”
All polling stations should be wheelchair accessible; should prominently display a large poster-size version of the constituency’s ballot paper for visually impaired people to use as a guide; tactile ballot-papers for the visually impaired, a low polling booth for wheelchair users, extra seating for frail or tired people to rest, and a ballot-box accessible to wheelchair users.

Voters who need assistance can avail of companion voting or they may seek the assistance of the presiding officer, a spokesman for the Department of Housing and Local Government said.

A group established in 2018 by Minister of State for Local Government, John Phelan was “working on improving accessibility to polling stations for voters with physical disabilities, particularly wheelchair users, with the goal of all polling stations being fully accessible as soon as possible”.

Challenges
Shelly Gaynor (40), living in Swords, Co Dublin, has cerebral palsy and uses a wheelchair. She has been registered to vote since she was 18 and has always exercised her right, though it has been challenging sometimes.

“Electronic voting though was a disaster for me,” she says. In the 2002 general election e-voting was piloted in three constituencies including hers – Dublin North.

“I had to get two big men top lift the machine down from the table so I could reach the button. They just didn’t think about wheelchairs when they were designing it.”
She is lucky she says to have a personal assistant, with 12 hours’ cover a day. “They are very hard to get. That is one of the major issues for people who want to vote but don’t have a PA to get them to the polling station. Then when they do they may not [be able to] physically access the booth.

“Transport is an issue. In Dublin it’s not too bad but I can only imagine what it’s like in some parts of the country. To even access to a bus once it arrives, can be a nightmare.”

She does not believe all local authorities are attuned to the needs of people with disabilities when it comes to voting in elections and referendums.
“If you physically cannot go out to vote; if you haven’t been told about the postal vote; if you can’t get into the room where the polling booths are, you can’t vote.”
Dermot Lowndes (61) too has been registered to vote since he was 18 though “missed out on voting” in the European and local elections last year because he had moved constituency and hadn’t realised he needed to change his vote.
He has a mild disability and lives in his own accommodation provided by St Michael’s House, in Fairview, Dublin.

Asked about the issues he would like addressed, he says: “More housing and more jobs for people with a disability”. He pays rent and works one day a week. “If you want to go out for the pictures or a few pints, it’s expensive. Money can be very tight.”